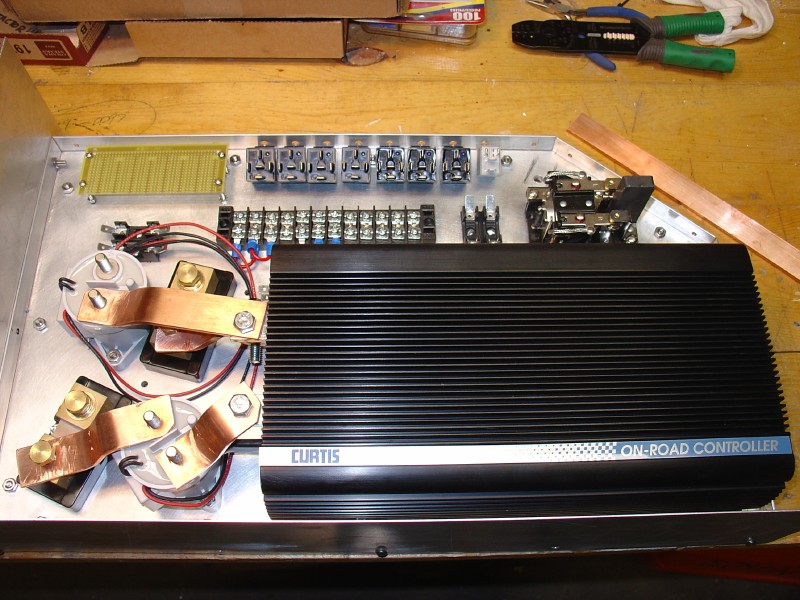 The reason for a controller is to regulate the power going into the electric motor. This is done to prevent you from stripping out the gears, blowing out your electric motor or snapping your spine as the motor tries to go from 0 to “infinity” RPMs when you flip the switch!

In the past, EV enthusiasts used [tag-tec]variable resistor[/tag-tec] technology to control the power to the motor. Others, mostly from the 1970s and early 1980s use contactor-driven switching to cut batteries in and out of the circuit.

Modern electric controller will “pulse” the current, cutting in and out at x per second, thereby feeding the motors variable power from a non-variable source.

Electric motors are basically single speed machines. It’s spinning speed depends on the power load it is given. But if you have a fixed load, and connecting the DC motor to a fixed voltage, like a battery, it will run at a fixed or constant RPM. This is not good for a DIY electric car because you have no speed control on your vehicle. Therefore, the primary function of the controller is to regulate speed.

Some people will mistaken an electric controller with a [tag-tec]Potentiometer[/tag-tec]. The device is attached to the accelerator pedal, thumb throttle or handgrip. The Potentiometer feeds the necessary power input to the controller like the lever on a carburetor.

This can be dangerous if the EV driver is caught off guard. When this happens, it also put a lot of stress on the electrical and mechanical components connected to the motor, and in the motor itself. To prevent that from happening, we use the handy electric controller.

3) Convert My Gas Automobile To Electric