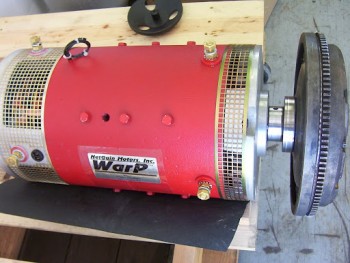 With soaring fuel prices, increasing number of people are constantly exploring various options to meet their transportation needs. Among them, electric cars are the most preferred option by numerous car owners and assembling or converting the existing cars at home from electric car kits available in the market as a do-it-yourself (DIY) task has become very popular these days.

Those having a fair knowledge of automobiles can easily make use of these kits to convert conventional gasoline-powered vehicles into electric cars that run with the help of electric current. However, converting a conventional gasoline-powered vehicle into an electric vehicle is quite an arduous task. Only people with an aptitude for undertaking mechanical jobs should attempt this job.

In order to convert an internal combustion-engine vehicle to electric vehicle (EV), practically all mechanical parts, right from the engine, the radiator, heater and air-conditioning system to the gauges on the panel are required to be either replaced or suitably altered. Above all, the electric cars need to be recharged from time to time either by purchasing the necessary equipment or availing the services of a nearest recharging station.

Solar energy is also a possible source of power for the electric vehicle. Here are a few frequently raised queries on electric car conversions and their answers.

Limitation in the choice of a car for EV.

Earlier most people considered electric cars are quite slow and lack power to pick up speed. However, with several developments in the electric vehicle technology, the cars converted using these vehicle conversion kits can achieve maximum speeds ranging from 70 to 75 mph. Even then conversion of gasoline powered cars to electric cars has certain deficiencies.

The major shortcoming is that batteries in the electric car need recharging frequently. For example, the Chevy Geo Metro kit must be recharged every 20 to 40 miles, depending on the quality of the battery and driving speeds. In any case, converted electric cars are best suited only for driving within the city and not for long distance driving.

The Chevy S-10 electric vehicle, converted using conversion kit, will run for a longer distance on a single charge. On a single charge, one can drive the Chevy S-10 ranging from 40 to 60 miles. However, this is subject to driving habits and the quality of batteries. A few S-10 models can be fitted with solar powered panels, which would minimize the need for charging at least when driving during the bright day light.

It is quite costly to convert the present gasoline engine powered car into an electric vehicle using a conversion kit. The prices of most of the conversion kits vary from $8,000 to $10,000 excluding the cost of batteries and professional installation charges, if services of a car mechanic are required.

In addition, one should also consider the cost of purchasing a battery charging equipment, if car is to be charged at home or the distance to a charging station. To sum up, considering the costs of conversion kits, it may not be a feasible option for the average car owner, particularly for those who frequently drive long distances on the highway.

Nevertheless, it would be suitable for those who are fond of doing automobile jobs at their backyards at their homes and do not mind paying a high price for a car vehicle conversion kit.