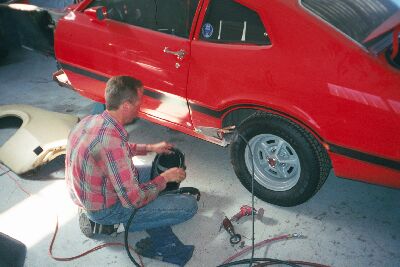 Nowadays, cars are quite costly some of them costing much higher than the salaries of average Americans. So mostly they use the services of car financing companies to get their dream car. They have to repay the car loan in installments usually in sixty to seventy-two months.

However, the interest rates are generally very high for such installments. Obliviously the owner has to pay much higher a price than the car costs to as interests of loan. So, it’s very imperative to take a good care of your car. The most important problem that a car suffers from is that of rust.

So, as a precaution one have to prevent the rust from occurring and if it does has to use the products that remove the rust from the body of the car. If you compare the rust with a disease then it’s like cancer becoming worse with every passing time and ultimately spreading to the whole body.

Metal is used to make the car body and we all know that metals are subject to rusting. The problem of rust becomes much more complicated in areas of extreme weather when moisture on road is high or salts are used to melt ice in winter. There are various precautionary measures that can be taken to avoid rusting of body exposed to moisture.

The paint is not sufficient to protect the body from rust as dirt, debris and other agents of corrosion damage the coating and metal is exposed to rusting. The smallest scratch that can hardly be seen from naked eyes will expose the metal to further damage as the agents of erosion and corrosion will have their toll.

The moisture and salts of the atmosphere will come in contact with exposed metal starting the oxidation of the metal. It’s the chemical reaction during oxidation that is commonly known as rust. As per chemistry, the metal gets weak due to loss of electrons during the oxidation process inducing further damage.

So, it’s highly recommended that you should clean and wax the car body every two week, mostly the parts that are more exposed to moisture salts. You need to inspect the body for any scratches, dents or any exposed areas from where the rust can start.

Take special care in covering these areas with wax so that it is protected from moisture. A touch up painting can be done in areas where paints are worn out.

For painting not only matching color but most suitable paint should be chose. By repainting and waxing effective precautions can be provided to the car. As a first aid and temporary measures nail polishes can be used to cover small scratches.

For covering the scratch a toothpick is very helpful to fill in and after that a good brush can be used to give the touch up treatment. It’s recommended to give your car a waxing treatment from good automobile dealers as they will always be more professional and expert in the job than you, doing the same at home. They will match the paint will and give professional finish so that the car gets a fresh look as well.

Thus a good waxing and repainting will seal the naked metals of the body providing effective protection from rusting to your car. When you are doing a homemade electric car project, it is best you get a donor car which is relatively rust free. If that is not possible, make sure you take proper precaution to maintain the external body of your car.