I have been keeping an eye on the electric car industry for over a year now. Since then, there have been a lot of new electric car models that have been unveiled from the manufacturers. These EVs are very practical for everyday driving. Some of the cars are not available for the time being, but the manufacturers have started taking orders. The following is my personal list of the Top Ten Electric Car Model.

2) BMW Mini E – BMW announced the production of a Mini powered by an electric motor in the summer of 2008 to be called the Mini E. BMW Group will be the world’s first manufacturer of premium electric vehicles to deploy a fleet of more than 500 Mini E for private use.

3) Fisker Karma – The Fisker Karma is a plug-in hybrid luxury sports sedan revealed on 14 January 2008 and manufactured by Fisker Automotive. So far, this is the closest luxury sport electric car that can rival the Tesla Roaster.

4) Chevrolet Volt – The Chevrolet Volt is a plug-in hybrid electric vehicle to be produced by General Motors. The vehicle is expected to be launched as a 2011 model with integration vehicles to be built starting on June 2009. In spite of GM bankruptcy filing, the automaker announced it remained committed to keeping the Volt on schedule. There has been a lot of buzz on the Chevrolet Volt. It looks like it could be the idea sedan electric car for the average driver.

5) Tesla Model S – The Tesla Model S is the second electric car model from Tesla Motors. This is a cheaper version of a sedan electric vehicle for the public. During the preliminary development stage, the car was actually codenamed WhiteStar. 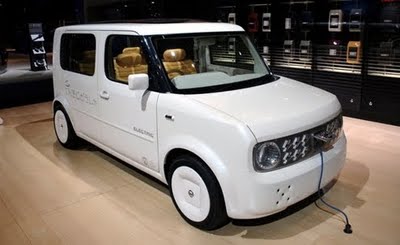 6) Nissan Electric Cube – The Nissan Cube is a mini MPV produced by Nissan and currently sold only in Japan, United States and Canada. In 2008, Nissan revealed the Nissan Denki (Japanese for “electric”) Cube Concept. Making its debut at the March 2008 New York International Auto Show.

7) Jeep EV Wrangler – The 2010 Jeep Wrangler EV, was revealed on the 2009 Detroit auto show. The Wrangler EV runs as an electric vehicle so long as its lithium-ion batteries hold a charge. The vehicle also has a 200-kW (268 hp) electric motor that can go up to 40 miles, before a small gasoline engine kicks in. The internal combustion engine doesn’t physically drive the rear wheels, but acts as a generator and feeds electricity to both the battery and the electric motor. In total, The Wrangler EV with the combination of battery and generator power is enough to travel 400 miles on a ten-gallon tank of fuel.

8) BYD E6 – BYD E6 is an all electric crossover in production by BYD Auto. Its all-electric range is expected to reach 400 km per charge. The E6 will be marketed as a 5-passenger family-oriented crossover vehicle.

9) Citreon C1 ev’ie – The Citroën C1 ev’ie is a model of electric car adapted from a standard Citroën C1 by the Electric Car Corporation. The model was first released on 30 April 2009.

10) Aptera 2e – The Aptera 2 Series is a high-efficiency passenger vehicle, currently in the final stages of design by Aptera Motors. The initial 2e model is a two-seat, three-wheeled battery electric vehicle. Aptera is currently accepting pre-orders from California residents.